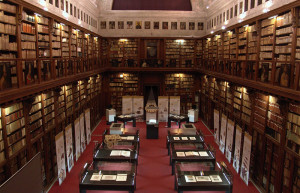 The Veneranda Biblioteca Ambrosiana (Honourable Ambrosiana Library), named after Saint Ambrogio, patron saint of Milan, was founded in 1607 by cardinal Federico Borromeo “for a universal service”. According to the Act of foundation of the Library, these words summarize the spirit of its founder, confirmed by the Pope’s act of 1608.

In 1604 archbishop Federico Borromeo had submitted to pope Clemente VIII his first project about the foundation of a big public library in Milan. His love for books came from the time he spent in Rome during his youth, where he had learnt about the importance of science and arts for a new evangelization through communication and study of modern culture.

His founder conceived the library as a centre for study and culture: in fact, he also opened the College of the Scholars, the School of Fine Arts and the Pinacotheque.

The cardinal collected for his Library a great number of codes in Greek, Latin, vernacular and many oriental languages. The Biblioteca Ambrosiana is one of the most important in Italy and in the world for the quantity and quality of its collections.

Since 1624 and in obedience to cardinal Federico’s will, this important institution manages the complex of Saint Charles in Arona, composed by the Statue and by the Church of Saint Charles Borromeo.