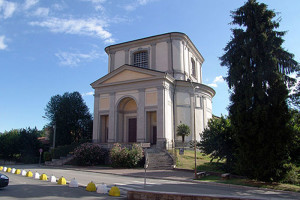 The church of Saint Charles in Arona was designed by architect Francesco Maria Richini and built starting from 1614.

The building consists of a single large square room in a baroque style. The motto of the Borromeo family “Humilitas” is written in the centre of the black and white marble floor.

The inside of the late baroque dome was painted in the early XVIII century (“Saint Charles with Saint Ambrogio and Saint Simpliciano, his predecessors”).

From the two doors either side of the altar, you reach a corridor that encircles a chapel dedicated to the birth of Saint Charles. This room is a reproduction of the “room of the three lakes”: in fact, some parts of the room of the castle, where the saint was born, were brought here in order to allow better access to the pilgrims. In the chapel, two closets with wood inlay doors, preserve relics of the saint.

In the same corridor there is a sedan chair,  used by Saint Charles, and a wooden model of Milan Cathedral made by the seminarists of the local seminary, on occasion of the third centenary of the saint’s death.