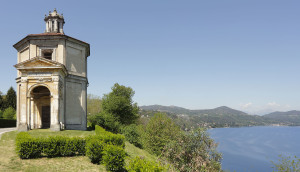 The ambitious project of a Sacro Monte in Arona was promoted by father Marco Aurelio Grattarola, from the fraternity of the “oblati”, founded by Carlo himself as an instrument and a support for his pastoral engagement.

Cardinal Federico Borromeo, Carlo’s cousin and archbishop of Milan, accepted this idea with enthousiasm because this planned monumental complex would have celebrated the greatness of the saint.

According to the project, 15 chapels should have been built, decorated inside with frescoes and statues, each dedicated to an important event of the saint’s life; a colossal statue and a church should have completed the plan.

The chapels were to be built along a climbing and winding road, beginning on the lake and ending at the basement of the statue.

In July 1614 cardinal Federico laid the first stone for the building of the church, but this impressive project was only partly achieved, because of several difficult events, first of all the continuous fights between the Spaniards and the French and the consequent famines and diseases.

Of the 15 chapels originally planned, today there are only three, unachieved in their architecture and unfortunately in very bad conditions.

The three chapels don’t belong anymore to the Biblioteca Ambrosiana, historical institution of Milan, founded by cardinal Federico himself, which has run the complex since 1624.