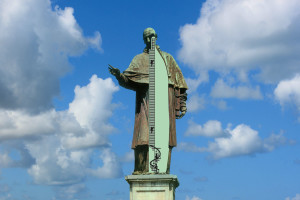 The statue of Saint Charles, or “Sancarlone” as the locals call it, stands on the top of a hill (about 310 m./ 900 ft above sea level) just above Arona.

Almost 35 m. / 90 ft tall it can even be seen from the lake, half-hidden by the ancient trees which surround it.

The statue is hollow and has an internal structure of stones, bricks and iron. The exterior is finished with sheets of hammered copper. The saint’s blessing arm is a complex metal structure, specially constructed to resist the strong winds in this area.

The colossus was designed by Giovan Battista Crespi, better known as “Il Cerano”. The sculptors Siro Zanella and Bernardo Falconi, moulded the copper sheets and slightly modified the original project, making the statue larger. Construction was completed in 1698.

Saint Charles is portrayed standing in his cassock, rochet and mozzetta as he blesses the town of Arona with his right hand while holding a book in his left arm.

Behind the pedestal two spiral staircases lead to the balcony where a door hidden in the pleats of the Saint’s cassock leads to another spiral staircase and steep vertical stairs that come out at the top of the statue. From here it is possible to take in the view through a series of portholes where the eyes, ears and nostrils are, or through some apertures along the back.

Not everyone knows that Frédéric Auguste Bartholdi, who designed the Statue of Liberty, stayed in Arona to study the statue’s structure. A plaque can be found at the foot of the statue of Liberty commemorating the inspiration given by the ‘Sancarlone’, now no longer the largest statue in the world.