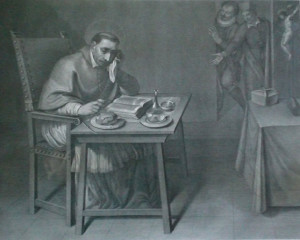 The Borromeo family originated in San Miniato, Tuscany, but they left that region after Filippo was banned and condemned to death in 1370.

Giovanni I obtained the citizenship of Milan and exercised his great influence at the court of the Visconti, that he helped financially. Already since 1393 documents state the existence of a bank belonging to the Borromeo’s, who were soon present at the most important financial markets in Europe.

Giovanni I nominated his nephew Vitaliano I as his heir. As a treasurer of the duke of Milan since 1418, Vitaliano I was politically very important at the court of the Visconti. In exchange of the financial help given to the duke, he was able to gain feuds and privileges. In 1439 Vitaliano became Lord of Arona and acquired more towns and lands on Lake Maggiore and in Ossola, fixing the basement of “Borromeo’s state”.

During XVI cent. the aristocratic tendency of the family prevailed; this is the century when the Borromeo began purchasing lands on the islands of the lake (Isola Madre).

Giberto II (about 1511-1588), Saint Charles’ father, obtained from emperor Charles V the confirmation of all the family’s privileges.

Two Borromeo prelates had a preeminent role in the history of the Church and of its reformation and thus the family’s feudal power strictly tied to the religious one. After Charles, his cousin Federico (1564-1631) lead the diocese of Milan. Federico continued the work of reformation begun by his cousin. The foundation of the Biblioteca (Library) Ambrosiana (1607) originated from his passion for philosophical and literary studies.

Charles III (1586-1652) was the creator of the project that transformed the Isola Inferiore (Lower Island) into the famous Isola Bella (named after his wife, Isabella d’Adda), but it was his son Vitaliano VI (1620-1690) who spent his life in the building of the palace and gardens on this island, helped by the suggestions of his brother and cardinal Giberto III.

His successor Charles IV (1657-1734) was made Viceroy of Naples and married Giovanna Odescalchi first and Camilla Barberini after his first wife’s death (two of the most important Roman noble families at those times).

Giberto V (1751-1837), who practised a lot of charity, was given several positions in the diplomacy of his times and became very famous.

Nowadays, the family was represented by Giberto Borromeo Arese, who passed away on February 16th, 2015. His heir is his first-born son Vitaliano Borromeo Arese.